On Saturday, April 29, the IABSE Future of Design 2017 conference was held in New York City. The Form Finding Lab was well represented, with Victor Charpentier in the organization, Professor Adriaenssens as a speaker and alumnus Professor Ted Segal (Hofstra University) leading a design workshop. Demi Fang ’17 summarized the main ideas of the speakers and panelists:

The Future of Design NYC conference kicked off with a vibrant set of “10 + 10 Talks,” in which structural engineers paired up with professionals in a field slightly different from their own. Each pair gave a joint presentation on their thoughts on the “future of design.”

Throughout the five presentations and the Q&A that followed, several recurring themes unfolded.

Technology can be leveraged as a tool to enhance, rather than compete with, the creative human process of design.

Glenn Bell (SGH) and Antonio Rodriguez (LERA) began with a presentation titled “Disruptive Influences as Opportunities, Not Threats.” Rodriguez gave a personal anecdote of a mentor who once warned him against entering the engineering field with the argument that computers would soon take over engineers’ work. Rodriguez explained how he has found that some engineering decisions do, and always will, require human judgment. That’s not to say that technology should be considered a competitor; rather, technology can play a key role in enhancing those creative processes that are best executed by humans.

Bell quoted Chris Wise of Expedition Engineering from a talk at the 2015 IStructE conference in Singapore: “Which bits of the engineer’s life are really human and which should we let go to machines?” Many presenters touched on the importance of this distinction, especially with the rise of digital drawing tools that easily allow for technology to “take over” the design process. Rodriguez made the distinction by identifying the processes at which computers do best, such as repetitive tasks and optimum searches. The use of these technologies “free designers to do what they do best: solving human problems.” He went on to conclude that the “future of design depends on how technology is used to enhance people’s skills, facilitate collaboration, and improve relationships.” 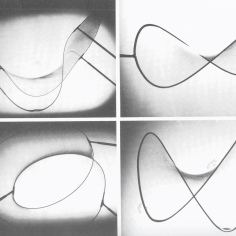 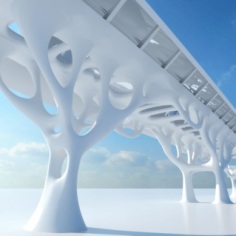 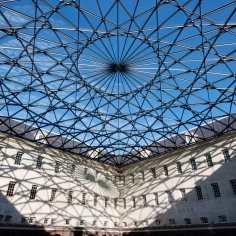 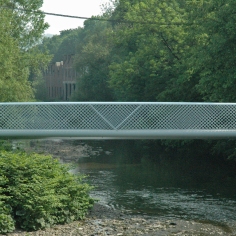 Verviers Passerelle by Ney and Partners 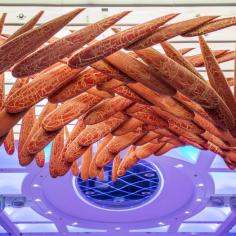 This approach was whole-heartedly echoed in the following presentations. Eric Long (SOM) cited Frei Otto’s scientific explorations of soap film as an example of how “technology inspires design.” As a firsthand example, he cited SOM’s partnership with Altair in topology optimization; fittingly, his presentation partner was Luca Frattari of Altair, who emphasized the fundamental role of these technologies as tools, or “a complicated pencil.” Sigrid Adriaenssens (Princeton University) presented some of her engineering projects such as Dutch Maritime Museum courtyard roof and the Verviers Passerelle from her practicing days in the Belgian structural engineering firm Ney and Partners. With a nod to David Billington’s principles on structural art, she used these examples to note how “using optimization tools efficiently can allow for efficient, economic, and elegant systems.” Her presentation partner, Bill Washabaugh (Hypersonic), also shared stunning sculptures that utilized engineering technology to not overshadow but recreate motions of nature, such as the rippling reflection of a tree over water, the murmuring of a sea anemone, or the flight of a flock of birds.

With increased levels of collaboration in the design process, broadness and diversity in education can help prepare engineers well for future challenges.

Bell pointed out that the drive towards resource efficiency and sustainability has led to the necessity of interdisciplinary collaboration in the design process. He described his perception of the structural engineer as a T-section, with the “flange representing a broadness in education, and the stem representing a fundamental expertise in structures.” As one of the few educators presenting, Adriaenssens answered one of the last questions squeezed into the end of the Q&A session: what educational approaches should be taken to prepare the next generation for the future challenges of design, which differ greatly to the challenges of the older generation? Adriaenssens shared her conviction in bringing students with different backgrounds into the field of engineering in order to supply a diverse workforce to face these interdisciplinary challenges. “Many of the students I advise are excellent in other fields – they are superb athletes, musicians, or dancers. Asking an 18-year-old to focus on one particular field limits their potential.” She mentions courses at Princeton that bridge engineering with other fields such as the arts, explaining that “aside from the traditional engineering courses, we also need courses that focus on interdisciplinary training,” supporting Bell’s previous statements.

Guy Nordenson (Princeton University) reinforced his colleague’s comments with statements on a more specific type of diversity: “I think Sigrid is a manifestation of where we’ve come and where we’re going,” not just with her more creative and innovative approach to engineering, but also her presence as a female in the field. “Looking out at the audience, it’s great to see that there are a lot more women in the field than when Glenn and I were students. We can do a lot to improve diversity in education starting as early as high school.”

The engineer has a responsibility towards social sustainability.

It was clear that one of the first slides in the conference resounded with most in the room. Bell presented a quote from Ian Firth, president of IStructE: “Why do we come to these structural engineering conferences and talk only about the most advanced, sophisticated structures that serve less than 1% of the world’s population? What is our obligation to the other 99%?” Many of the presenters who followed Bell fully supported the idea of “serving the other 99%” (later panel participants such as Elizabeth Mahlow of Nous Engineering were fully dedicated to this cause.) In particular, Nordenson mentioned the necessity to focus engineering education on addressing “human needs, infrastructure, and contributing to society. It’s not just about profit.” Nordenson cited historic examples such as Floodplain Management and the New Deal as instances where engineers played an especially key role in shaping solutions for society.

Discourse from those with expertise in engineering “craft” can enhance the architectural criticism.

Julian Rose (Artforum) engaged Nordenson in a conversation on the nature of collaboration between architects and engineers. Rose pointed out how architects seemed to feel rooted enough in the creative process to not feel as threatened by technology as engineers might – after all, in contrast with the iconic reputations associated with some architects’ names, “often an engineer’s best work is invisible. You’ve said that getting an engineer to talk about their work can be likened to getting a tooth pulled,” Rose said to Nordenson. “That’s really interesting because you’d be hard-pressed to find an architect who wouldn’t talk about their work. What could change in the engineering profession to change this culture?”

Nordenson recounted Leslie Robertson’s beautiful drawings of the original World Trade Center which demonstrated artful use of different types of steel, proving Robertson’s prowess as, in Nordenson’s words, a “painter with steel.” These engineering drawings, Nordenson said, were not appreciated until their unveiling at the 2008 Felix Candela Lectures at MoMA. “We engineers sometimes lack motivation to talk about what we do,” Nordenson says, which is a shame since “architectural criticism fails to recognize the complexity of craft.” Nordenson stated that while the engineering artistry of Leslie Robertson or the material inefficiency of Calatrava’s WTC Transit Hub may not be immediately clear to the general public, “the critic’s role is to unveil these to the public.” Calatrava’s Transit Hub uses 20,000 tons of steel, Nordenson says, “two-thirds that of used in WTC Tower 1. And most of the steel used is purely decorative, not to mention an awful expenditure of public monies. Where is the critic? There is a lack of expertise, and critics are not serving society by not conveying the horror of it.” Noteworthy in this case, Nordenson adds, is how Calatrava considers himself an engineer, representing a “perversion of expertise.”

Detail of the facade of the original Twin Towers, engineered by Les Robertson (LERA) 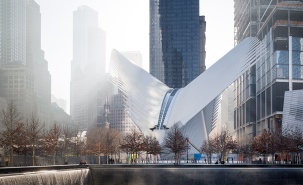 The critic’s role is to unveil the complexity of craft to the public. – Guy Nordenson

Bell closed the Q&A session with a comment on another component of education that he considered crucial in training the engineer: to study the works of past engineers. “It’s done in architecture all the time,” but never enough in engineering – not necessarily as a form of idolatry, but rather as a way of celebrating and learning from engineering masterpieces of the past in order to push the envelope and discourse of the future of engineering.

The innovative spirit is not an overnight phenomenon but an incremental one.

“Innovation is intimidating. We all have to think about innovation every day,” Michael Stein (sbp) stated in his presentation with Anand Babu (Sidewalk Labs). The government may serve as strategic planners, but engineers are needed as “creative thinkers that deal with disruptive ideas on a daily basis and develop tools to solve urban problems.” Stein introduced the idea of getting into the office at 9am not to innovate but to begin and continue the slow process of innovating.

One of the first questions in the Q&A was from a bridge engineer who appreciated the idea of innovation but was unsure how to embrace it in his professional life. “How can we influence government agencies with the innovative spirit?” Long responded: “join a committee, and if it doesn’t exist, create a new one. As engineers, we have power with our knowledge, and we should use existing community infrastructure to share it,” harkening back to both ideas of engineers bearing social responsibility and the necessity of improving the public discourse with engineering expertise. 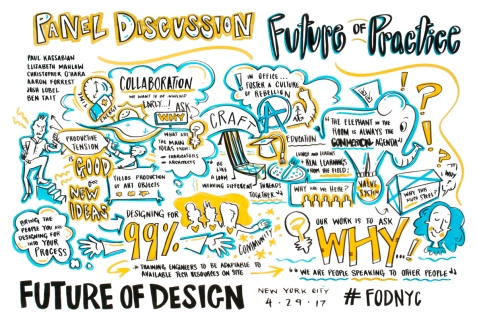 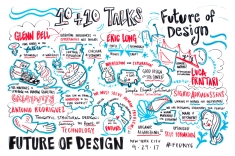 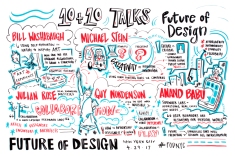